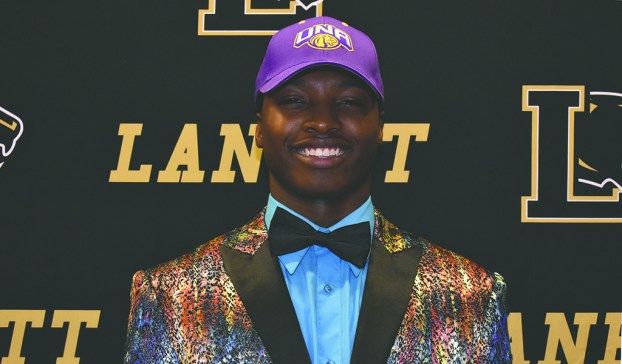 Lanett High School senior Jawon Howell signed a letter of intent to play football at the University of North Alabama during a Wednesday ceremony at LHS. (Photo by Sam Chandler)

LANETT — Jawon Howell was waiting for the right offer.

On Saturday, it came.

The Lanett High School senior took a weekend trip to the University of North Alabama in Florence. He didn’t leave empty-handed.

“For North Alabama to come out and offer me a full ride was a major blessing,” Howell said. “It was an answer to my prayers.”

Howell signed a letter of intent on Wednesday to continue his career at UNA during a ceremony held in the LHS auditorium. Wearing a colorful blazer and black bowtie, he thanked God and his family for helping him reach this watershed moment.

Then, he put pen to paper.

“It means the world to me,” he said. “I’ve got the opportunity to showcase my talents at the next level and pursue my dreams of going to the NFL.”

On defense, Howell earned All-State honors after totaling 130 tackles and eight sacks. He said he will play running back at UNA.

In the classroom, he plans to study either geology or engineering.

“I also get a great education by going,” Howell said. “I want to make my family proud.”

Howell considered signing with Eastern Kentucky, Jacksonville State and West Alabama. But those schools only offered him partial scholarships.

UNA’s offer made the choice clear. He couldn’t be joining the program at a better time.

The Lions will transition from Division II to Division I in the fall and will compete in the Big South Conference. Already, Howell has set high goals.

He wants to start as a true freshman, propel his team to a conference title and earn a shot at playing professionally.

But on Wednesday, he savored the celebration.

“I love my city, I love the fans, the community,” he said. “It’s just a blessing to be here today.”

LANETT — They revealed their decisions one by one. At first, it was Anquaevious Pollard who slipped on a tan-and-blue... read more