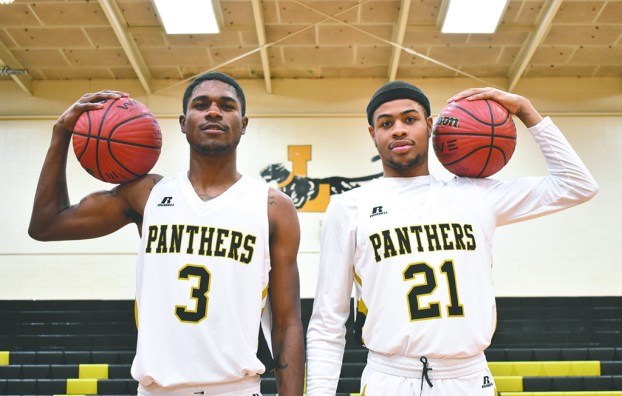 Lanett High School seniors Anquaevious Pollard (left) and Emanuel Littles (right) are an imposing tandem on the court and best friends off it. Pollard is 6-foot-7, and Littles is 6-foot-8. The big men have helped spur the Lanett boys basketball team to back-to-back Class 2A state titles. (Photo by Sam Chandler)

LANETT — Emanuel Littles and Anquaevious Pollard are like brothers.

Few of their fellow classmates stand in a similar stratosphere: Littles is 6-foot-8, and Pollard, nicknamed “Long,” is 6-foot-7.

Rarely can they be found apart.

Littles and Pollard ride to school together, attend basketball practice together and spend their free time together. Barring events that mandate their singular attendance — like Littles’ part-time shifts at KFC or Long’s football practices —  the two are practically attached at the hip.

Their bond carries over to the court.

Littles and Pollard have been stalwarts in Lanett’s varsity lineup the past three seasons. Their presence on the floor, often in the post, has helped the Panthers win back-to-back Class 2A state titles in 2016 and 2017.

Now, they are eyeing a third.

“What I’ve seen these past few weeks, the way we’ve come along, from here it’s nothing but going up,” Littles said. “I feel like it will be an easy three-peat if we keep working hard.”

Lanett, ranked third in the latest 2A state poll published by the Alabama Sports Writers Association, has not lost a game in close to a month. The Panthers (17-5) enter today’s regular-season finale at Valley riding an eight-game win streak that dates to Jan. 5.

On Friday, they upset Russell County, one of the better teams in 6A, 84-83. Littles scored 25 points and Pollard had 24 points in the victory.

“People have asked me, ‘Coach, what’s the best team you’ve had?’” said Carter, a 48-year coaching veteran. “I’m about to say that this one is.”

The Panthers could not cruise at their current efficiency without their two big men. Neither could the Alabama Hurricanes.

Littles and Pollard first met while playing on the same AAU basketball team in eighth grade. Pollard, along with Lanett senior guard Ty Truitt, were already members when Littles joined.

Littles spent the first 14 years of his life in Trenton, N.J., before moving south to live with his grandfather, Emmitt Blackshir.

He had never played organized basketball before hopping in with the Hurricanes.

Up north, he didn’t have the time or resources to compete in a league. Street basketball provided him with his hoops foundation.

“I wasn’t able to play sports and do the things I wanted to do, but being down here, coming down here with my granddad, being able to live life as a child, I got a chance to play basketball,” Littles said. “I’m really grateful for it. I’m blessed.”

His arrival at Lanett as a freshman proved a blessing of its own for the Panthers basketball program. The two years after he transferred yielded the first two state basketball championships in school history.

Littles’ relationship with Pollard has strengthened with each ring. Each has grown more familiar with the other’s tendencies and more invested in the other’s success.

Littles and Pollard were both named First Team All-State selections in 2017, with Pollard winning 2A Player of the Year. Either could claim the distinction this season, as both are averaging a double-double.

Littles excels at rebounding and shot-blocking, while Pollard thrives at shooting and ball-handling.

Their combined skill set, and height, creates mismatches all over the floor.

“When people start thinking, ‘Well OK, they’re going inside to Pollard,’ then we go inside to Manny,” Carter said. “They complement each other in that respect.”

Littles and Pollard are taking advantage of their final season together. They know it won’t last forever.

Littles committed to Florida Atlantic University in November and will solidify his plans Wednesday, which is National Signing Day. Pollard will sign too, but he is still working out the details.

He has narrowed his potential destinations to Northeast Mississippi Community College and Independence Community College in Kansas. Pollard, who also is an All-State wide receiver, is weighing whether to pursue football, basketball or both at the next level.

“These last couple of visits I’ve been on, it’s been making me change my mind,” he said. “But Wednesday, everyone will know.”

While their signings will take them in diverging directions, Littles and Pollard still have work to do at Lanett. They began their final athletic assignment with Tuesday’s upset win over Central-Phenix City.

It was the first of 10 games the Panthers have earmarked as a must-win. They hope the final contest in that stretch will take place on March 2, in the 2A state final.

“You’re talking about a team with twin towers,” he said of Littles and Pollard. “With those two cats, it’s hard to lose.”

Rams down LaFayette in overtime

VALLEY — The first meeting between the Valley High School boys basketball team and LaFayette came down to the wire.... read more