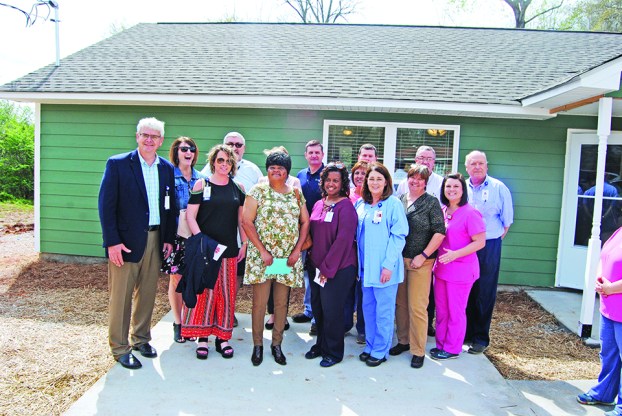 Wayne Clark | Times-News EAMC-LANIER CREW: Administrator Greg Nichols (far left), EAMC-Lanier Cornerstone representative Lisa Ruffin (in front, at center) and a host of hospital employees took part in Friday afternoon’s home dedication on Huguley Road in Valley. New homeowner Loretta Brewer (third from left on the front row) has worked in the hospital’s cafeteria area for more than 25 years. Among those wishing her well at the ceremony were her supervisor, Fran Irmiter, ER supervisor Ryan Earnest and Cindy Daniel.

Fuller Center will soon start work on No. 40

VALLET — With CFCP Home No. 39 completed and occupied, attention has now turned to No. 40. It’s going to be located on 26th Avenue in Valley’s Red Dirt Hill neighborhood. Brian and Amanda Carroll will be the new homeowners. They have two school age children.

The concrete pad for the new home will be poured next week, and the house will be built in the third week of June. Some local volunteers will be taking part but most of the work will be done by the Stuck family, long-time Fuller Center volunteers who live in Pennsylvania. They have been to the Valley several times on CFCP projects.

“They are some of the hardest working people you will ever meet,” said CFCP Executive Director Kim Roberts. “We love them to death. There’s ten people in the family. The husbands do the construction work and the wives do the painting.”

Homer Heard will be doing the plumbing and Cecil Ramsey will be heading up his 40th roofing job for the CFCP. He’s done the roof work for every home built by the organization.

“It amazes me how Mr. Cecil goes about the job,” Roberts said. “It’s hard work doing what he does, but he makes it look easy. He’s done so much for us, and we appreciate him so much.”

Also important to the CFCP construction projects is the volunteer help from Pastor Waymon and the young men of New Birth Ministries.

VALLEY — Loretta Brewer let out a shriek when she walked into her new home Friday afternoon. It was by... read more