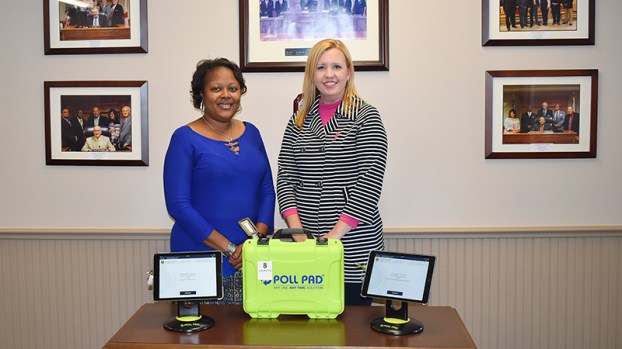 LaFAYETTE — After being approved by the Chambers County commission earlier this year, the county has received new Poll Pads that are supposed to speed up the voting process come Nov. 6.

Although the actual act of filling out a ballot and casting a vote will remain the same as it has been in previous elections, Probate Judge Brandy Easlick said that the check-in process will be sped up significantly by the new, completely digital system.

“The Electronic Poll Pad is basically an Apple iPad used to check voters into their precinct on election day and to tell the poll worker what ballot style to give the voter,” Easlick said. “Poll Pads allow the poll worker to scan a voter’s driver’s license, state identification or voter ID card or to search for them manually by name, date of birth, voter ID numbers or voter address.  It keeps a record of every voter that voted on that day. The Poll Pad greatly reduces the wait times to vote because of how quickly and efficiently it processes each voter.”

The pads are produced by election technology company KNOWiNK and come in a compact carrying case. When assembled, the iPad holding all of a specific precinct’s voting data faces the poll worker as voters file in. After the voter’s information is obtained by either scanning their ID or manually entering their information with the touch screen, they are given their proper ballot type and proceed to a booth to fill it out.

“There is more efficiency all around,” Easlick said.

“Not only in processing voters quicker, but in leaving no room for error on the voter’s side and for the poll workers too.”

Easlick said that Chambers County was one of the 25 counties statewide that was able to test the pads in the 2016 general election. She said the people of Valley and Huguley who got to use the devices “loved” them.

“Two precincts in our county used the poll pads for that election and were very impressed with how well they expedited the process and how easy they were to use,” she said.

Once voting is completed at the end of the day, the date on the Poll Pad is uploaded to the Board of Registrars, speeding up the process for them as well.

Those who vote in Chambers County on Nov. 6 will be able to see the new technology first hand, as every precinct will have at least one with those in Valley, Lanett, LaFayette and Huguley having six, four, three and two, respectively.

VALLEY — Thanks to funding from the state of Alabama, the City of Valley’s Chattahoochee Valley Railroad Trail will be... read more