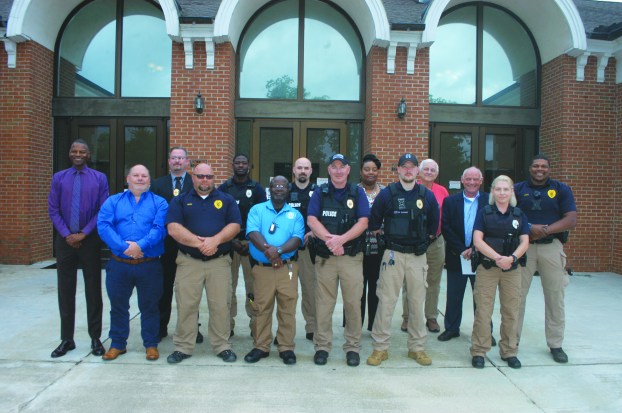 LANETT — The Lanett City Council took care of some major items of business on Monday, including a significant pay raise for first responders.

Mayor Kyle McCoy said that the city’s police officers, firemen and EMS personnel were very much deserving of salary increases.

“They do their jobs while taking the risk of contracting diseases such as COVID-19,” he said. “They not only suffer themselves but also potentially expose their families to harm. Even if provided strong safety protections, they are still taking a risk and these risks should be adequately rewarded.”

A large delegation of the city’s first responders were there to witness the good news that they are getting raises.

“Thank you, guys, for being here and everything you do to keep us safe,” McCoy told them.

The new raises go into effect on June 1. Council members took turns thanking the first responders for being present at the meeting and telling them they deserved a pay raise for what they do for the citizens.

“I have always said that there are two jobs I would never have,” said Looser. “I wouldn’t be a school bus driver, and I wouldn’t be a police officer. I really admire what those people do.”

Years of experience figures into this.

“In terms of our starting pay, we will be competitive with all surrounding agencies,” McCoy said. “With this action, the council is showing strong support for both our first responders and our citizens. We are telling our citizens we want them to have the best personnel we can have to keep them safe. We are telling our first responders that we think they are as good as anyone in the region.”

On behalf of his officers, Chief Johnny Wood thanked the council for the pay raises. He said that it would put Lanett on par with many other cities.

Other items included approving qualifying fees for those who wish to run for a seat on the city council or the city school board later this year, committing to participate in the statewide Back to School Sales Tax Holiday and agreeing to seek grants for two new police vehicles and bulletproof vests for the officers.

The council held the first reading of an ordinance setting a qualification fee of $50 to run for a seat on the Lanett City School Board. The ordinance would become effective following a second reading at the next council meeting.

A resolution approved by the council appointed City Clerk Deborah Gilbert to supervise this year’s municipal election, which will be taking place on Tuesday, August 25.

This year’s Back to School Sales Tax Holiday will be taking place the weekend of July 17-19.

“I’m hoping we will be going back to school this year,” McCoy said.

The Lanett Police Department is seeking two new Ford Interceptors to replace two aging vehicles. They could be acquired through a 60/40 USDA Rural Development Program grant. If the grant is approved, the police department could be getting the new vehicles with the city paying a little more than $19,000 for each vehicle. The federal government would take up the rest of the bill.

The LPD could be getting 20 new bulletproof vests for the officers should a grant through the U.S. Justice Department be approved. It would come in the form of a 50/50 split with the total award of $15,480 to come next year.

“We do this every five years,” Wood said. “We are asking for 20 new ones. Every officer will have a vest.”

Studies have shown that the risk of being fatally shot is 14 times higher for officers not wearing one of these vests.

There was a vacant chair with a white ribbon being displayed in front of it at Monday’s meeting. It was in memory of Council Member Shirley Motley, who died Friday after a lengthy illness.

“We are here tonight with heavy hearts,” McCoy said. “It’s a difficult time for our city hall family.”

Council Member Tony Malone said that the city had lost an angel with Motley’s passing.

“She was so knowledgeable about city government and helped me in so many ways over the years.”

“I will never forget her always calling me on the day of a council meeting to remind me to be there,” said Council Member Heard.

“I will really miss Mrs. Motley,” said Council Member Angelia Thomas. “She helped me a lot in my first term on the council. I will always appreciate that.”

An inmate at the Troup County Sheriff’s Office has died after committing suicide by hanging in their cell Monday afternoon.... read more