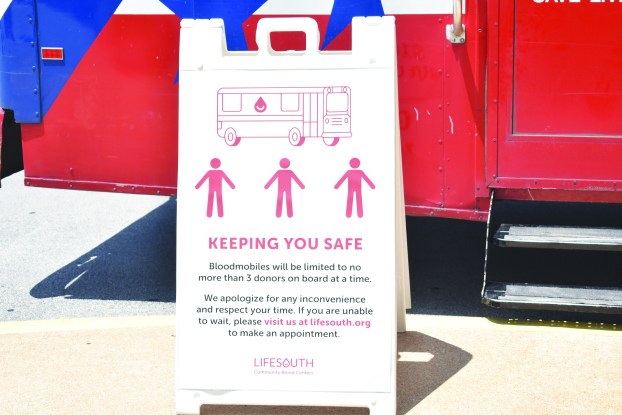 On Thursday, the LifeSouth van was parked in front of Kroger and held its first blood drive at that location since April 18.

The event, which lasted about six hours, had a great turnout, according to regional manager Maggie Burns Blaedow. In the first 30 minutes, more than six people were already registered to donate.

“When the virus first hit, people came out in numbers because they wanted to do something. They wanted to give back,” Blaedow said. “People still continue to support their community, and that’s what I think [donating blood] is about.”

Cameron Hyatt and his mother were two people that were at the drive right when it opened.

“It’s something that we’ve been trying to get into more often,” Hyde said.

The pair had just started to get into the routine of giving blood, but they made sure to visit the truck on Thursday because of the lack of blood in supply. Thursday was his second time donating.

“The events happening now [the COVID-19 outbreak] have motivated her to do it more often, and she’s been pushing me to do it also,” Hyatt said. “It is just a reactionary, help-where-you-can kind of thing.”

The drive made sure to have COVID-19 precautions.

Before they were to fill out any registration forms, donors were screened. All employees were wearing masks.

Only three donors were allowed on the truck at one time. The donors were all placed on one side of the truck, which allowed them to be six feet apart. Every surface was wiped down after the donor was through with the surface. The stress balls were also placed inside of plastic bags. Bags were disposed of after the donation.