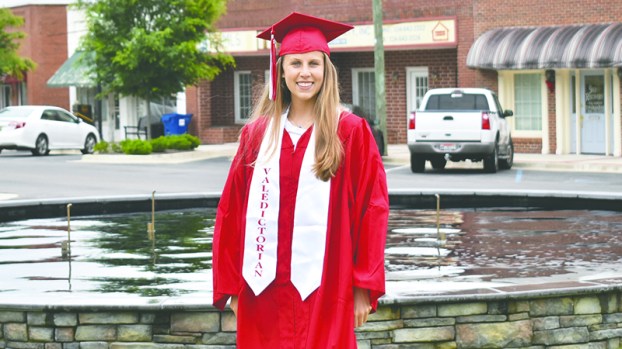 Springwood valedictorian Andie Martin plans to attend the University of Georgia in the fall. --Cody Estremera

Andie Martin has been a Wildcat her entire life, as she follows her brothers, mom and aunts through the school.

While on a Zoom call with Springwood headmaster Lowrie McCown, Martin was named Springwood School’s valedictorian of the class of 2020.

“I was just really happy,” Martin said. “Springwood is not an easy school to go to. It challenges you, so it’s been a lot of hard work. It was good to hear it paid off.”

The first people she told were her parents.

Both of her parents were key influences for Martin during her high school years.

“Every day, whether it’s been in school or as a person, they’ve definitely pushed me to be better,” Martin said.

Martin has spent her entire academic career at Springwood, finishing on Saturday as a charter member of the class. In those 13 years, the school has become her second home.

“I know it’s cliche, but it really has been everything,” Martin said.

“It’s been a part of my family for so long. It’s become a second home. It’s just another family for me.”

Martin has embodied Springwood throughout her time as a Wildcat. In October, she was named Homecoming Queen by the Springwood students and Ms. Springwood by the faculty and staff. Ms. Springwood is given to the student that displays character, attitude, trustworthiness, behavior, conduct, academics, leadership, school spirit, involvement, motivation, and a heart for community service throughout their Springwood career.

Martin has been involved in numerous areas of Springwood since high school, as she was involved in athletics and several clubs.

Martin was a member of the cheerleading squad, basketball and soccer teams.

She was the captain of the varsity cheerleading team in her senior year and was named a Universal Cheerleaders Association All-American.

Martin was a co-captain on the Wildcats’ basketball team that was ranked the entire season. She just missed averaging a double-double for the season, finishing with 8.6 points and a team-high 9.6 rebounds a game. She was part of the Wildcats’ 30-0 perfect season and earned a championship ring in 2016.

She was one of the founding members of the Wildcats’ soccer team and started at center back. She was also one of the two team captains on the 2020 squad.

She was the President of the Student Government Association (SGA), a member of the Wildcat Worship team and Math Team.

Her favorite club was SGA because of the activities it was involved in.

“It helped us just be more involved in the school,” Martin said.

With all of the different sports and clubs she was involved in, Martin has been put into leadership roles for the last couple of years.

“It definitely teaches you a lot,” Martin said. “Even though you are just in high school, getting to lead people is just important to always stay positive. You just have to look with a positive outlook on things and continue to be encouraging, especially when you’re in a leadership position because people look up to you to lead the way.”

After graduating, Martin will move on from the Wildcats and become a Bulldog, as she plans to attend the University of Georgia.

She is exploring different majors in the journalism department.

John Prescott was trimming bushes outside of Long Cane Baptist Church on April 6 when he started developing symptoms of... read more