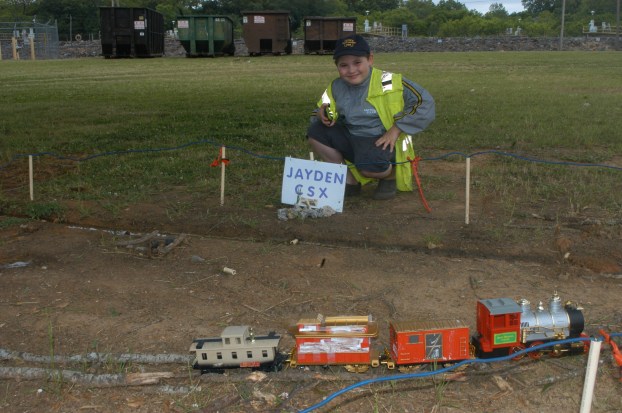 aFayette Lanier Elementary student Jayden Rogers has been able to spend time behind the Tractor Supply with his grandfather and watch the trains go by since school has been out due to COVID-19.

LANETT — Eight-year-old Jayden Rogers loves trains, especially the big ones from CSX Transportation that rumble through Lanett and West Point.

Jayden’s grandfather, Willie Rogers, takes him to a number of places where they can watch the trains pass by, but their favorite place is on the east side of the tracks behind the new Tractor Supply store. They’ve found a grassy spot under a big oak tree. It’s a cool place and ideal for train watching. Jayden has started work on a model of CSX coming through Lanett. It’s got the Tanyard Creek trestle, the Lanett Mill water tower, track and a model train. He has meticulously made the tracks and cross ties by laying tiny pieces of the nearby oak branches from end to end.

“I’ve been bringing him here almost every day,” said Mr. Rogers. “It’s a cool, shady place, and Jayden gets all excited when a train goes by. He videos it on his phone.”

On Wednesday, Rogers took Jayden to Bob Harding-Shawmut Elementary School, where he picked up his report card. He finished the second grade this year and next school term will be a third grade student at LaFayette Lanier Elementary.

He hasn’t been in a classroom setting since March due to the coronavirus shutdown. That has given Mr. Rogers plenty of chances to take Jayden to his favorite train-watching sites.

“I think what we’ve been doing is safe,” Rogers said. “We are out in open areas and not around crowds of people.”

Most boys in their growing up years idolize sports stars, men in the military and first responders. Jayden likes those guys, too, but his real heroes are the railroad men of CSX. He’s gotten to know a number of them and they have come to know Jayden as the No. 1 fan of CSX. They’ve given him a hard hat, CSX yellow work jacket and other railroad memorabilia.

There have been several stories about Jayden and his love of trains, CSX in particular, in The Valley Times-News. Jayden likes to cut them out and send them to the CSX office in Montgomery, where they are displayed on a bulletin board. Many an engineer, conductor or track maintenance crew member has seen these clippings and immediately recognize their young friend.

“Jayden loves anything about trains, especially CSX,” Mr. Rogers said. “His room is filled with all kinds of railroad stuff.  He especially likes the photos of him we’ve had taken with the men who work with the railroad. We had a birthday party for him at the bowling alley when he turned seven. We invited some men we have gotten to know who work for CSX. They came and brought him a model of a CSX engine. Jayden loved it.”

Jayden’s mom, Christy Nelson, works in the office of Dr. Anz in Opelika. It’s not far from the CSX main line, and sometimes when there’s a north-bound train coming by she will call Mr. Rogers and tell him about it. Soon he will be taking Jayden to another trackside adventure.

“Jayden is a card,” Mr. Rogers said. “I love spending time with him. He’s really proud of his model city. It makes his day when a train comes by. He loves hearing that train horn blow when the train is coming into West Point on the north side or coming up from the south through Huguley, West Shawmut and Lanett.”