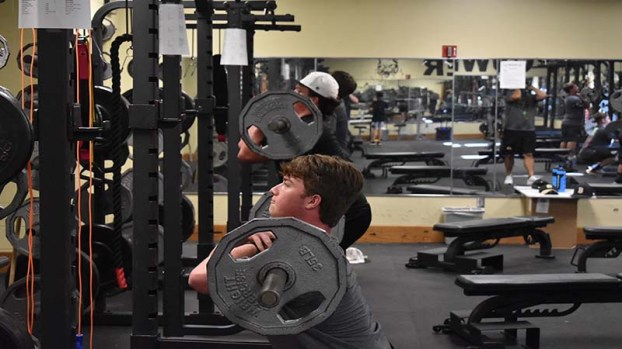 The Beulah football team is finally getting to work. After an employee at Beulah Elementary tested positive for COVID-19, which was later proven a false positive, both the high school and elementary school shut down all on-campus activities.

On Wednesday, Beulah head coach Matt Johnson was able to gather his team together for the first time since March.

“It’s great,” Johnson said. “You never realize how much you miss your athletes. During the school year, you’re always thinking about how you’re going to break or go on vacation, but when you’re off for so long, it’s just so good to see them. They’re in good spirits, and they’re working hard.”

Workouts start at 7:30 a.m. CT, but the first 20 to 30 minutes are for the coaches to screen players before they enter the school.

Once all players are screened, they are split into three groups.

On Thursday, the linemen started in the weight room, receivers and quarterbacks were in the classroom and running backs and linebackers were doing agility drills outside.

“We try to base it off position groups,” Johnson said.

Each group switched after about 30 minutes.

Outside there were four boxes for players to do box jumps on, moving down a line. After the player completed the last box jump in line, they moved to a mat and started doing different ab exercises. They also did hill sprints.

In the classroom, players went over different expectations and learned their roles. Once they are allowed to get onto the field, the classroom group will work on different position drills.

“We’re running these agilities, conditioning and weights, so it also gives them some time to rest a little bit and get their legs back underneath them,” Johnson said. “These 20 or 30 minutes that we’re in the room, we’re focused on football. These other ones, we’re working on getting in shape and working hard. That room in there gets them focused on the football aspect.”

Johnson’s biggest goal for his team this summer is to build their bodies before the start of the 2020 season. The Bobcats have a tough schedule ahead of them. Of the 10 teams they will play, only two had a losing record in 2019.

“We want to get everybody in shape and get as many people out as we can,” Johnson said of this summer’s workout goal. “We have to fill some positions. We’re missing a lot of skill players, so we’re trying to hone in on that.”

Valley football gets back to business

Even though there was uncertainty about its head coach, the Valley High School Football team has been putting in work... read more