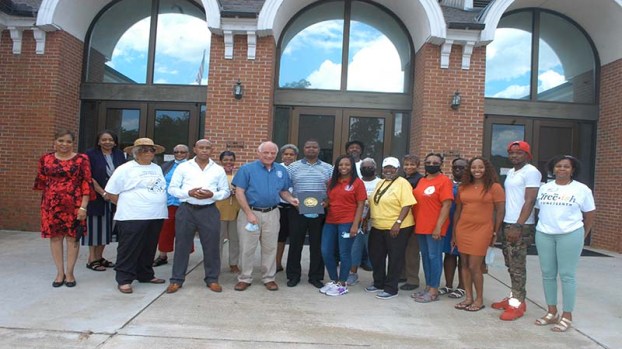 LANETT — On Monday of this week, the Lanett City Council approved a proclamation recognizing June 19 as a holiday in the city. Widely known as Juneteenth, it’s a day that celebrates the end of slavery in the U.S. On that date in 1865, African-American residents of Galveston, Texas were informed by Union soldiers that the Civil War had ended in a Union victory and that black people were no longer slaves. A massive celebration then ensued in the streets of the town.

On Thursday afternoon,  Lanett Mayor Kyle McCoy presented a proclamation announcing the permanent city holiday to members of this year’s Juneteenth Committee. This is the tenth year Juneteenth has been recognized in Lanett and West Point. From 2011-18, it was celebrated on the grounds of Goodsell Methodist Church in Lanett and last year the celebration took place in West Point River Park.

Goodsell pastor Dr. Randy B. Kelley played a key role in organizing the celebration and keeping it going. He’s now at the Lakeside United Methodist Church in Huntsville but came back to Lanett for the proclamation presentation.

“We always saw Juneteenth as a multicultural event and took pride in having blacks, whites and Asians present for our celebration,” he said. “Goodsell was an appropriate place to have the celebration, given its long history in educating children. For many years, it was the only place in the local area African-American children could get an education. In more recent years, it has been the home church for African-American educators, notably the late L.B. Sykes and Mrs. Sykes.”

The original Goodsell church was built by freed slaves in 1866. The church was leveled by the 1920 tornado and built back.

McCoy thanked members of the Juneteenth Committee for being at city hall for the proclamation presentation.

“This is more than a photo-op,” he said. “We are here to recognize that Juneteenth is an annual city holiday to be observed in Lanett. There’s a lot of turmoil in our country today, but something we recognize as Christians is that being freed from bondage is something to celebrate. The Bible celebrates the freedom of the Israelites from the Egyptians. The freeing of African-Americans from slavery is something to celebrate, too.”

McCoy said the American people were shown this in the Gettysburg Address in 1863 and again in Dr. Martin Luther King Jr.’s “I Have a Dream” speech 100 years later.

“Even today, we have to be reminded of who we really are as Americans,” he said.

McCoy looked at members of the Juneteenth Committee and told them he didn’t see color.

The mayor read the line from Lincoln’s Gettysburg Address that the dead should not have died in vain but that their sacrifice should result in a new birth of freedom.

“We need to celebrate that birth of freedom in Lanett,” he said. “It’s my honor and privilege to declare June 19 an official city holiday in Lanett.”

That statement was followed by some loud applause and cheering from the committee.

“This is not just a footnote for us in Lanett,” McCoy said. “It is something we will celebrate in the years to come.”

The downside to an otherwise happy occasion is the realization that Juneteenth is not being celebrated in-person this year due to COVID-19 restrictions on gatherings. Hopefully, that won’t be a problem in June 2021.

Hospitalizations of patients with a positive case of COVID-19 at EAMC and EAMC-Lanier are at its lowest point since May... read more