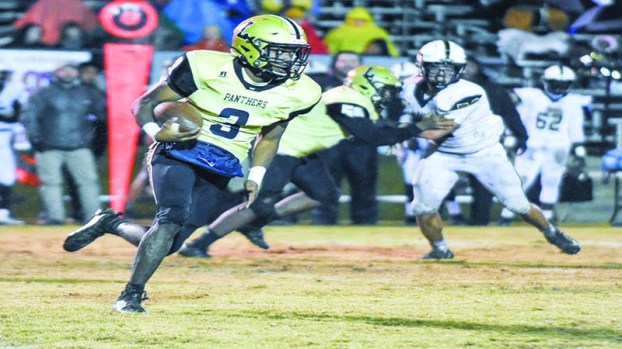 Another member of the 2020 State Champion Lanett Panthers has committed to extend his football career.

Quae Houston has committed to play football at Faulkner University.

Houston took his official visit during basketball season, and while on his tour of the campus, he noticed the discipline that was shown around campus.

“I think I’m going to need that a lot,” Houston said. “The coaches made me seem like their main focus.”

Houston had originally committed to play football at Huntingdon, but the Eagles’ coaches kept on their pursuit of the 5-foot-11 receiver.

“They said how much they need me,” Houston said. “[Faulkner head coach Tommy Wasden] kept calling me and asking me what made me choose Huntingdon and how they could get into the decision too. He called me and told me what I needed to hear.”

As a Panther, Houston played as a defensive back and a receiver. At first, he had the opportunity to decide which side of the ball he would want to play on, but with depth issues, Faulkner head coach Tommy Wasden made the ultimate decision, deciding to play him at receiver.

“I like receiver better, but it really didn’t matter to me,” Houston said.

That lack of depth at receiver means Houston will be competing for playing time when camp starts in the upcoming months, which was a key reason he decided to flip his commitment to Faulkner.

“That was a big reason why I chose Faulkner,” Houston said. “At the receiver position they don’t have too much depth, and I know that I need to get film. When they told me that, I automatically knew that this is where I needed to be.”

His goal of getting film is for Division I coaches because his goal is to play at Faulkner and hopefully transition to a D1 program.

Even though he knew how recruiting worked, his cousin, Kristian Story, was able to give him advice throughout his journey.

“Kristian really told me a lot of things that I need to look at when I choose my school,” Houston said. “He was basically saying ‘if you can’t see yourself there, then you shouldn’t go there.’ For me, I’m looking forward to Faulkner.”

Along with Story, Lanett Head Coach Clifford Story played a big factor in Houstons’ recruitment. Clifford Story always pushed Houston on the field and in the classroom, making sure that he would make it to the next level.

“Coach Story is like my father,” Houston said. “He always stayed on me, making sure that I had the right ACT scores to make the jump and making sure that I was preparing myself for the next level. He always told me that I could play at the next level, since the 10th grade. That’s when I really started to take football seriously. I thank coach Story out of everybody.”

Houston will have three teammates from Chambers County joining him at Faulkner, as Chambers Academy’s Brody Smoot, Gabe Brooks and Jake Waldrop all have signed to play with the Eagles.

“I was at a football game with them. They’re pretty cool. I can’t wait to get to Montgomery and get to work with them,” Houston said.

Houston one of seven members of the Lanett class of 2020 to continue their athletic careers after high school. Five of the seven will play football.

BJ Smith and Dametrious Johnson committed to Point University. The Eagles and Skyhawks will play each other twice during the 2020 season. The latter matchup will be at the Sportsplex in late October.

LHS gets back to business

Defending 1A State Champion Lanett has restarted summer football workouts after having to stop them after only one day due... read more