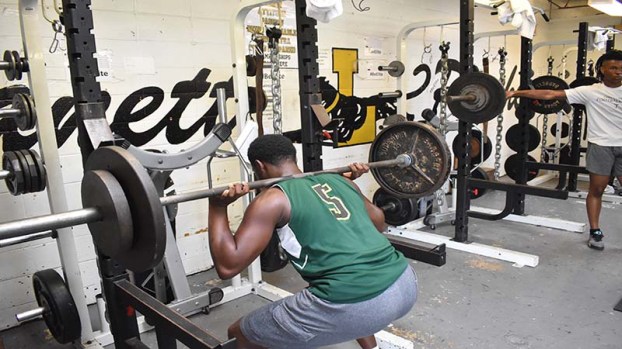 LHS gets back to business

Defending 1A State Champion Lanett has restarted summer football workouts after having to stop them after only one day due to COVID-19.

The team waited until June 15 before starting back and has been putting in work in the six days since restarting.

“We’re just getting back to familiar with what’s going on,” defensive coordinator Charlie Williams said. “It’s a scary time in America right now. There’s so much unknown and so much uncertainty that we just want to get them back to some type of normalcy.”

With guys not being able to play their spring sports and workouts being put on hold until June, the emphasis this summer is to just get in shape with only two months before the first game on the schedule.

“We’re a small school that has a lot of guys that play both ways,” Williams said. “It’s just constantly preaching conditioning.”

Tuesday’s workout started at 8 a.m. and lasted for about three and a half hours.

Coaches split up the athletes into several groups at workouts.

In the weight room, players started with five sets of back squats, increasing the amount of weight by 5% after each set. The first set was 10 reps while the other four were sets of eight. After back squats, players did three sets of 10 on front squats, keeping the same weight. They then took the barbell off the rack and did three sets of hang cleans. They finished with a barbell squat burnout.

On the field, players worked skills in their position group.

Linebackers and defensive backs practiced foot speed drills. One started on ladders that were on the hill, while the other group did hurdles. After running through their drills, the two switched.

When the linebackers went to the weight room, the defensive backs worked on coverages.

When the defensive line finished in the weight room, they went through different drills that focused on exploding out of their stance.

One drill was a race, where the group was split into two teams. They had to explode out of their stance, grab a flag that was on the ground, run around a cone, drop the flag and finish where they started.

After finishing in the weight room, the linebackers paired up with the defensive linemen. They went over blitz packages.

The offensive linemen worked on their stance and getting more explosion on their first step.

Skill position offensive players walked through a couple of plays, working on their route running.

According to Williams, that is how the Panthers normally try to do their workouts, so there is as little standing around as possible. The only difference this year than normal was the emphasis on spacing out, trying to be about six feet apart.

“We’re just constantly having to repeat the spacing part because they’re with their friends,” Williams said. “I need to get a shirt made with six feet on it and just point at my shirt.”

Players and coaches also had to wear masks in the weight room.

The Beulah football team is finally getting to work. After an employee at Beulah Elementary tested positive for COVID-19, which... read more