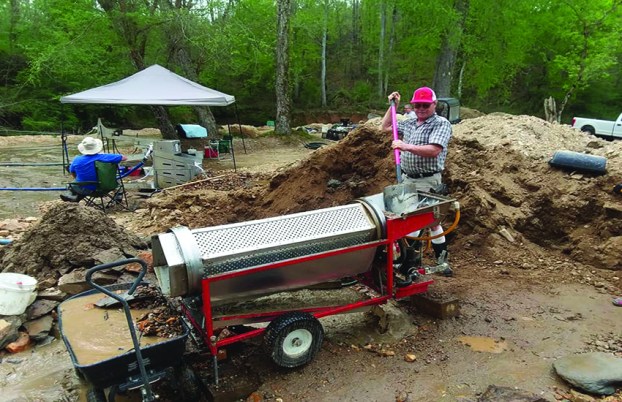 CRAGFORD — Fredonia resident Dan Harriger attended a Lunch-N-Learn program several years ago at Bradshaw-Chambers County Library and found the topic of discussion extremely interesting, so interesting that it has become a great hobby for him.

The topic was gold mining in Alabama, and Harriger is today the president of the North Alabama chapter of the Gold Prospectors Association of Alabama (GPAA). Their meetings take place at the Alabama Gold Camp, located near the Randolph/Clay County line on Crooked Creek. The site is owned by Jeff Landrum of Valley and is visited by lots of people from Chambers County.

“I have been in this for six years now,” Harriger told The Valley Times-News. “I’m always learning, and that’s why I got involved in the GPAA.”

Gold prospecting in Alabama, said Harriger, is not something anyone should get into if they want to strike it rich. That did happen in early Alabama, but those days are long gone. It’s something people do today for the fun of it, to learn mining techniques and to enjoy a host of events that take place at the Gold Camp.

Not too far from Gold Camp is a crossroads community known as Goldville. It’s in northern Tallapoosa County near the Clay County line. It’s a small settlement now with few stores but back in the 1840s, it was a wild place with close to 5,000 people. America’s first gold rush was in Dahlonega, Georgia. The second one was at Goldville. They found gold by crushing it out of rocks on Hogg Mountain. It was hard work, and a few people got lucky. Legend has it that the famed King Cattle Ranch in Texas was founded by a man who struck it rich gold mining near Arbacoochee, Alabama not far from Anniston.

Smashing gold out of rocks is one type of mining. The most common type, according to Harriger, is placer mining.

“That’s the majority of the kind of mining that has gone on in Alabama,” he said. “Up and until 1849,  Georgia and Alabama were the top two gold mining states.”

1849 is the year of a major strike in California. It was one of the major events in the early history of the U.S., creating a gold rush that played a major role in the settlement of the west.

Harriger said the Gold Camp is a fun place. It’s located on a 200-acre site just outside Cragford.

Visitors can have hands-on experience in testing their luck at finding gold. “You can work with someone who has been at it to see if you’d like to get involved,” Harriger said. “Our organization is a fun club. We do lots of training in how to pan for gold, to run the equipment and how to find concentrates.”

A group from Bradshaw Library has taken a trip to the site and had a memorable experience in Crooked Creek. Harriger and GPAA members have taken road trips to share their love of mining with different groups. They took a trip to Columbus in the past year to take part in a Game Day for Heroes event at the Columbus Family Center off Exit 6 on I-185. A total of 72 veterans signed up. Many were accompanied by their friends and family members. ‘

“We brought a bag of dirt with some gold in it,” Harriger said. “We taught them how to pan for gold. They got really excited when they found some.”

Prospecting is one activity people with disabilities can do. For example, someone with the use of just one arm can run what’s known as a high banker.

“It takes only one arm to shovel dirt into the sluice box,” he said. “I once worked with a Vietnam veteran who lost both legs below the knees. He got in the water and worked a dredge and a floating sluice box with a motor and water pump. This piece of equipment creates suction in a hose and gathers material off the bottom of the creek.”

Harriger said that taking part in this has proven to be very enjoyable for those with disabilities.

A side benefit of what’s going on at the Gold Camp is that they are making a cleaner creek.  “It definitely has an environmental benefit,” Harriger said. “We have found mercury previous miners used years ago. We removed it. We have also found lots of lead bullets. We’ve removed them from the creek. The removal of silt from the creek bottom helps fish eggs hatch.”

The Gold Camp is an active place on the second Saturday of the month.

“We have an average of 20 people in the water that day,” Harriger said. “There’s no fee to join our club. We start in the morning. We see who has equipment and we divide up into groups. It’s different from what it used to be with us practicing social distancing now. We manage to get it done, and we work until around 2 p.m. We knock off for the day and meet back at the pavilion, where we provide a meal. We do lots of grilling, and everyone has a good time. We have two raffles for prizes and a 50/50. The tickets are one dollar each. The money we raise lets us buy food and equipment. We won’t get rich doing this, but we are enjoying an outdoor experience. At the pavilion, people tell us of other places they have gone to and some good ideas they have come across.

“We have had people coming up from Florida to see what we do. We’ve had someone coming here from Mississippi and someone from as far away as Germany. People from all over have come to the Gold Camp.”

One of the most popular events is a coin school. It’s an event for people with metal detectors. Harriger buys approximately $300 in coins. He buries them two to three inches deep in an open field. He then puts 1,000 pennies on the ground and runs over the entire area in a four wheeler.

“We charge $15 to participate,” he said. “It’s the only thing we do we charge admission to. Anyone with a metal detector has 90 minutes to find what’s there. You can keep anything you find.”

First, second and third place prizes are awarded on a point system. Children pay $5 to participate for prizes. In the adult division, there’s a gold item valued at $100 for first place, $50 for second place and $25 for third.

“We bury two special tokens,” Harriger said. “If you find one there’s a prize of a silver coin worth $18.

When the 90-minute search period is up everyone gathers for a meal.

“If you want to go back and search for more, you are more than welcome. We’ve found that having events like this is a way to get people interested in what we are doing. It’s more than prospecting. People can find things with metal detectors, too,” Harriger said.

“We had something really amazing several years ago,” he said. “We had a guy here with a really good detector. They are looking for coins that are buried two to three inches deep, but he was getting pings on something that was much deeper and was curious about what it was. He dug down about four feet before he found it. Amazingly, it was a mortar ball from the Civil War era. To this day, no one has any idea how it got there.

People can camp at the Gold Camp for $5 a night. Restrooms and showers are available. Piles of dirt are on the creek bank to help people run the high bank sluciers. Harriger credits Landrum on making the Gold Camp visitor friendly.

“He must have had a lot of Tonka toys when he was a kid,” Harriger jokes, “because he has got the big stuff now. Jeff does a great job of keeping the camp looking good.”

The Gold Camp will play host to a fun day on Saturday, July 4th.

“It’s all free that day,” Harriger said. “There will be a chickencue dinner at 6 p.m. CDT, and we will have a big fireworks show. It’s our way of thanking people for being there.”

Another fun day will be taking place on the third Saturday in October.

“We will be running Goldzilla that day,” Harriger said. “It’s a smaller version of a machine you see on the TV show Alaska Gold Rush. It’s really something to watch it run. This is something Jeff does one day out of the year. It’s a day people can get a view of the action and can keep what they find. We have a big cookout that day, and everything’s free.

“We have big-screen TVs set up and show past Alabama-Auburn games,” he said. “One year we had some live entertainment and the guy was really good, but people complained they couldn’t hear the football game.”