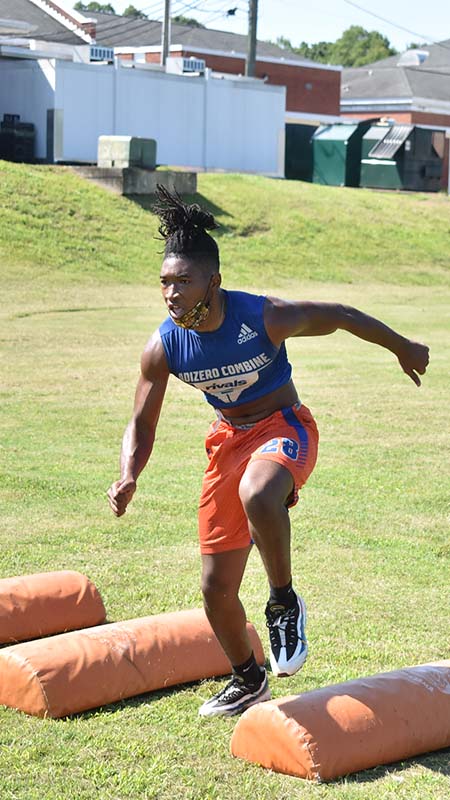 Valley held its fifth workout on Thursday. The Rams have had to split up their 60 athletes into three different groups for

Valley football gets back to business

Even though there was uncertainty about its head coach, the Valley High School Football team has been putting in work the last two weeks.

“It was kind of a bad time, as far as coach [Buster] Daniel retiring. It was bad timing because of what’s going on, not that he retired, but just because our kids couldn’t see us,” head football coach Adam Hunter said. “All of our coaches reached out to the kids and talked to them a lot. They really stayed true to what we believe in, and they were patient. I know they were excited to see each other. That’s what we’re trying to do is build that family relationship.”

Since there are restrictions on the number of students allowed together at one time, the Rams have been holding three separate workouts, splitting the group of about 60 students into three groups, starting at 7 a.m.

The first group to come in was the linemen. They work from 7 a.m. to 8:15 a.m.. Once they leave, the quarterbacks, linebackers and running backs work from 8:30 a.m. until 9:45 a.m. The final group is made up of receivers and defensive backs.

“Everybody’s been buying in,” Hunter said. “These kids have been working hard, getting back in shape, getting our feet up under us because they haven’t done anything since March. We’re getting back into the swing of things as far as where we were when school let out. I’m very proud of them.”

Thursday was the group’s fifth workout.

After warming up, the groups started with flat bench, warming up with the bar, then doing two sets at 65% of their max and two sets at 75% of their max weight. After benching, they moved onto squats, which followed the same formula. The final lift was barbell hand snatches.

After finishing their lifts, each player went through several agility drills, working on ladder drills and jumps.

They finished with 10 60-yard sprints.

In order to participate in workouts, athletes had to wear a mask. When they were out of the weight room, they had to separate in order to keep 6 feet of distance.

“We’ve got our guidelines that we have to follow,” Hunter said. “Those guidelines are continuing right now, so we’ll just have to wait and see what unfolds later on. As those guidelines change, we’ll change what we’re doing. We have to change on the fly depending on what guidelines come out.”

Since Buster Daniel decided to retire and take the head football coaching position at Lee-Scott in early May, Chambers County... read more