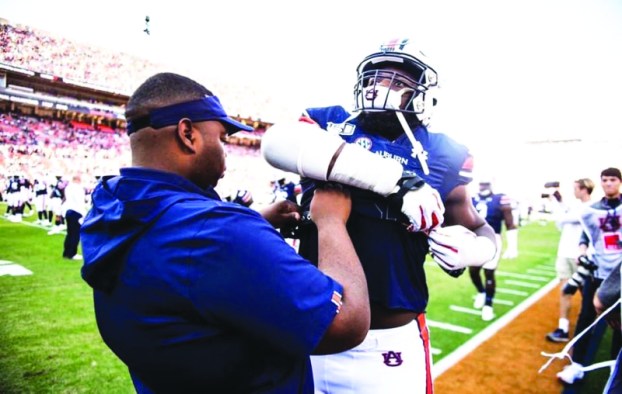 At 21-years-old, Cameron Reed is already living out his dream. The former high school football manager has spent time working at the Governor’s office and is now working at football’s highest level— the NFL.

Reed began his journey at Lanett High School, working with the Panthers’ football team in three of his four years at Lanett. In his senior year, the Panthers won their 2017 state championship. Reed was on the sideline at Bryant-Denny Stadium when the Panthers claimed that elusive title.

After the season, Reed knew that he wanted to go to a community college but didn’t know where. He sat down with head football coach Clifford Story and the two started to discuss options Reed could follow.

“Coach Story went to work,” Reed said. “As you know, he’s pretty good at getting his players and someone like me that was literally a water boy a scholarship as well. It was crazy.”

Story called through his network of colleges throughout the state of Alabama, and by the end of his phone calls, Reed had more than six colleges that offered him a full scholarship to attend their university and be a manager.

Ultimately, Reed chose Wallace State in Hanceville to spend the next two years of his academic career, working with the Lions’ baseball team.

Head baseball coach Randy Putman even came down for an official signing day.

“I got there, and that was the best two years of my life,” Reed said.

Reed spent his freshman year working with the Lions’ baseball team as a manager. Meanwhile, he was also doing some work with the UAB athletic department.

Near the end of his freshman year, Reed was trying to figure out which direction he wanted his life to take. He had three different options that were weighing on his mind at the time.

One option was in the funeral industry, as he had worked at Davenport and Harris Funeral Home.

The next was politics.

While he was still at Lanett, people always told Reed that he would enter politics and was going to be a mayor at some point. The political route really took hold when he interned with Carrie Royster and the Valley Chamber of Commerce. While he was there, he had the chance to shadow District Court Judge Calvin Milford.

“From that time, I wanted to be in the political route,” Reed said. “I liked it. I liked sitting up there with the judge.”

Even after his internship ended, Reed would go talk to Milford and pick his brain about entering the political world.

His final thought process was to continue working in sports. He was already the manager of Wallace State’s baseball team and Putman loved having him on the staff, so much so that he decided to promote Reed from manager to Director of Operations during his sophomore year.

That decision came to a head in the summer of 2018.

Reed finished his freshman year at Wallace State and instead of returning to Lanett for the summer, he went to Montgomery, where he was one of 16 students in the state of Alabama to intern with Gov. Kay Ivey.

Right before starting the internship, Reed received a phone call from Gage Whitten, who was the equipment manager at UAB at the time. Whitten informed Reed that he wanted him to take an internship with the Tennessee Titans, working as an equipment manager.

“Dude, you’ll love it. You’ll get so much experience, get some exposure and make some connections,” Whitten said to Reed.

Reed informed Whitten that he already had an internship, but Whitten was persistent.

“Cam, this is one that you do not want to turn down,” Whitten said.

Reed told Whitten that he would take the job, and 30 minutes later, he received a call from the Titans, informing him that they were going to get the hiring process started.

Reed’s next phone call was to the governor’s office. He told them about the Titans internship and asked if instead of staying till July 27, if he could leave early so he could go to Nashville.

His coordinator didn’t hesitate to let him leave early because of the opportunity.

Reed started his summer working with Gov. Kay Ivey and her staff. He worked with communication and media, appointments, policy, administration, the Governor’s mansion and legal teams. He also had the opportunity to visit other state agencies and departments.

“When you have the push to want to go to a job, and you are really excited about going to that job that day, then that should give you that idea of okay, this is for me. Every day when I went to work for the Titans or Wallace State, which were both sports teams, I was ready to go to work,” Reed said. “At the governor’s office, I was kind of dreading it. It was like ‘wow, I didn’t know it would be like this,’ not necessarily saying I didn’t like it, but it’s a different arena.”

When he left Montgomery and went to Nashville, he was back in his element.

With the Titans, he was able to connect to the players and take pride in seeing his work.

“It was the connections I made with the players. It was the opportunity to see the work that I’ve done,” Reed said. “When a player is out on the field in the helmet, shoulder pads and nice uniforms, that is my work. I shined that helmet. I cleaned those shoes, I washed those clothes. It just makes you rejoice and see what you have done come to life.”

After the Titans finished their season on Dec. 30, Reed went back to Wallace State and started his time as the Lions’ director of operations.

Before graduating in the spring of 2019 from Wallace, Reed started to plan the next step of his college career.

Because it was close to his family in Lanett, he decided to start the process to become a manager at Auburn.

“That was very exciting. I could not ask for a better opportunity than what I got at Auburn,” Reed said.

Reed worked with the defensive line while he was at Auburn, working with players like Derrick Brown and Marlin Davidson.

“Working with Derrick and Marlin every single day was a pleasure. To see both of those guys do big things, it amazes me because I’ve worked with those guys,” Reed said. “My position with Auburn was definitely enjoyable. It was a great ride.”

Davidson is one of Reed’s favorite players that he’s had the opportunity to work with just because of his zest for life.

Because his time as a student was coming to an end again, Reed decided to step away from Auburn and started to pray about the next step.

He didn’t have to wait long before the next door opened.

The pair helped Reed get back into the NFL, helping by mentoring him through the hiring process.

Reed is now employed by the Chicago Bears.

“I’m just thankful. I’m very excited to get to work,” Reed said. “We start training camp in late July and I’m ready to get it going.”

Jacob Oliver has been a huge part of the Chambers Academy football team’s success the last four years. Now in... read more