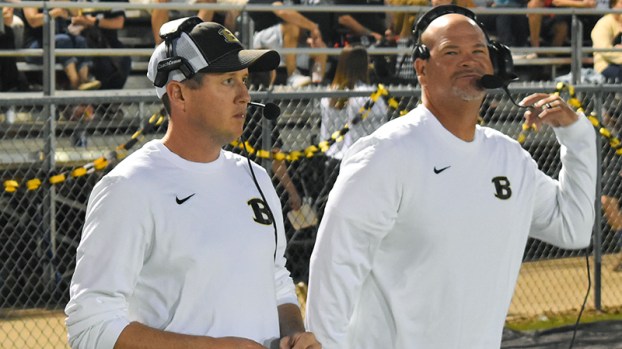 Beulah Head Coach Matt Johnson is in quarantine due to COVID-19 and won’t be at Friday night’s game. --File Photo

High school football in Alabama is entering its fourth week of the 2020 season, but Friday night signals the start of the season for the Beulah Bobcats.

Beulah announced on Aug. 12 that the team would miss the first three weeks of the season because of a player testing positive for COVID-19. The entire team and coaching staff then went into quarantine for two weeks, missing the first game of the season. Because of the Alabama High School Athletic Association’s rule following a quarantine, all players needed to go through a five-day acclimation period, causing the Bobcats to miss the next two weeks.

“We had all last week, and we are full speed this week,” head coach Matt Johnson said. “We are all healthy in terms of players and coaches who are there and ready to go Friday.”

Even with the Bobcats starting their season on Friday, Johnson will not be on the sideline, as he is still in quarantine after coming in contact with a person who tested positive for the virus. Thomas Hill will be the team’s head coach instead of Johnson on Friday night.

With the loss of Johnson for the week and one other coach on the Bobcats’ staff, practice has been forced to change.

“The practice plans that you normally have, have to be a little bit less stressful,” Johnson said. “You have to have a lot more group work, a lot more team work and a lot less individual time because you don’t have as many hands or eyes on the kids. This isn’t the first time that this has happened, so we’re kind of trained in these scenarios.”

The Bobcats have been forced to change plans a lot since the start of COVID-19.

The Bobcats jump straight into region play to start their season, as they host Trinity, who is 2-1 on the season and 1-0 in 3A Region 4.

“I’ve told our guys from week to week it’s going to be a battle,” Johnson said about jumping into region play. “We’re going to use whatever gameplan that is installed this week. So far, it’s been pretty good. They’re just ready to play someone else.”

In their most recent game, the Wildcats defeated area opponent Goshen 47-6.

“They have a really good quarterback. Their running backs have great vision. They’re well-coached. There’s not a weakness on the team. With the depth they have, it’s going to be tough for us, but we’re just ready to play some ball.”

Trinity has won both matchups in program history, with the most recent game being played in 2009. In the series, Trinity has outscored Beulah 59-10.

It took less than two minutes, for the Chambers Academy Rebels to score their first touchdown of the young 2020... read more