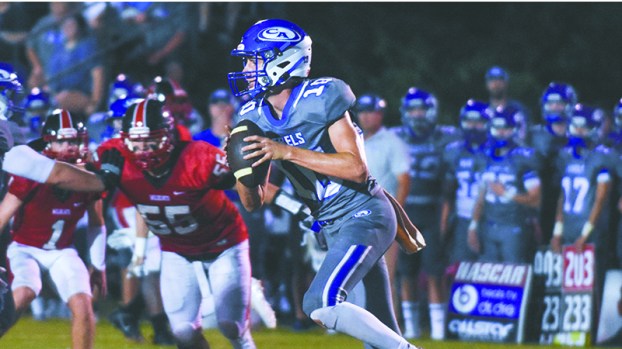 After holding teams scoreless for the first three weeks of the season, the Chambers Academy Rebels first-team defense gave up its first touchdown of the season against Lowndes Academy. Chambers had a miscommunication on an option play, where the other player thought they weren’t going to get the ball. That resulted in a fumble inside the Rebels’ own 10-yard line and a touchdown for Lowndes.

After the game, head coach Jason Allen said that if the Rebels didn’t turn the ball over, he felt that they could win every game this season. That philosophy will get put to the test on Friday, as the Rebels will be dealing with the aftermath of Hurricane Sally.

“I don’t think ball skills have anything to do with talent,” Allen said. “Ball security and putting the ball on the ground, those are mental issues, those are concentration issues. Those are learned skills. I don’t care if it’s snowing, sleeting, hailing, whatever, if you concentrate on what you’re doing and holding on to the ball, you shouldn’t put it on the ground.”

In their last game, senior quarterback Payton Allen was able to attack both through the air and on the ground, something he hasn’t had to do too much so far this season. The senior finished with 365 yards of total offense, running for a game-high 120 yards.

“Everybody knows he can run,” Allen said of his son’s running ability. “I think it’s huge. He’s going to have to run the ball more as we go down the stretch. But we still have a lot of faith in him throwing the ball. That’s just another dynamic that is going to make it harder for them to defend as we enter the second half of the season.”

The Rebels now turn their attention to the Valiant Cross Warriors.

The Warriors are in their inaugural season for a program and are 1-2 on the season. They defeated Lakeside in their first game of the season before dropping their last two.

“They’re athletic and fast. They have good size,” Allen said of the Warriors on tape.

Allen said that the multiple looks the Warriors could give shouldn’t be a problem, since they have the depth to sub in different defensive looks.

“Our defense adapts to whatever,” Allen said.

Chambers will also be holding its homecoming game against the Warriors.

“It’s that one game of the year where everybody comes back,” Allen said. “I think it’s big for our seniors because it’s their last homecoming. It’s a fun week. There was a time in my career where I was really against all that stuff, but I guess when you get older, you get a little more relaxed and have a good time with it.”