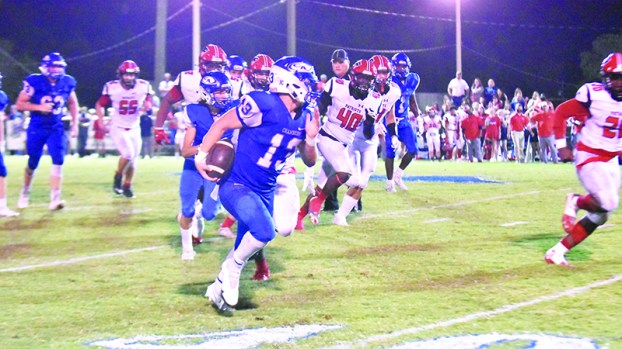 There were a lot of errors and uncharacteristic plays a week ago when the Chambers Academy Rebels went to Elmore and picked up their first loss on the season.

The Rebels failed to score on a couple of possessions in situations that they have excelled in this year and couldn’t get off the field defensively. They also had a turnover deep in their own 25 late in the game, which proved to be the game losing turnover.

“Our kids are disgusted, I’m disgusted with how we played, especially on defense, just wasn’t up to our standard,” head coach Jason Allen said. “That falls on me for not having them ready to play. We didn’t play well at all and I thought Edgewood did play well. I thought they outplayed and outcoached us, which hasn’t happened a lot in the last several years. We’re motivated to get the ship back on the right track, especially defensively.”

With that loss, the Rebels are in a spot they haven’t been in since 2015, which was the last time they lost a region game. In their last few playoff runs, the Rebels were able to stay at Tolbert field, which is a big advantage for the Rebels.

One thing a loss will do for the Rebels is help get them focused on their next game.

“That’s the good that you try to take from it,” Allen said. “You’d rather this happen early than late. There’s a chance that when you’ve won like we have over the last few years and start out the year 6-0, you’re not as hungry. I think sometimes the worst thing you can do is have an off week because you can lose your rhythm. You can kind of lose your momentum.”

As of now, the Rebels are the third seed in their region, sitting behind 2-0  Macon-East and 2-1 Edgewood.

The Rebels still have a good shot to finish the year as the No. 1 seed, but they have to take care of business the next two weeks.

The first game is Macon-East.

“If we want to have a chance to play at home in the playoffs, we have to win this football game,” Allen said. “At the same time, we probably need to be ahead in point differential as well. We’re not really chasing points. We’re just going to try to play a perfect game.”

According to Allen, stopping the run and just playing physical are the two keys for the Rebels to get back on top and dominating like they were the first six weeks of the season.

“Sometimes  I think you can get so enamored with the passing game that you can lose context of some of those things,” Allen said. “If you go back and look at pretty much every football game, the team that blocks and tackles best is going to win.”

Macon-East is undefeated in the region for a reason. The No. 9 team in AISA has experience finishing off a region, which they could do this week with a win.

“They’re very well-coached,” Allen said. “Their guys play hard and they’re going to get after it. We have to be ready to play. The good thing is we get to play at home. It’s a really big game for both teams.”

The Knights are led by their running back Carlos Carter, who nearly has 1,000 yards this year. In five of the six games he has played in, the senior has eclipsed 100 yards. He has also scored 14 touchdowns this year.

If the Rebels want to get back to their physical run-stopping ways, Carter and the Knights are a good test.

After easing through the first set of the match, Beulah volleyball stumbled during the second set but was able to... read more