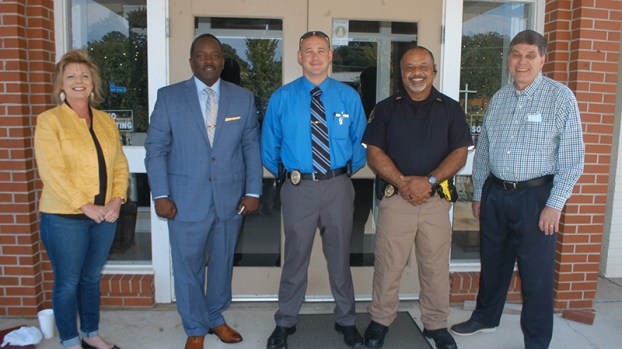 LANETT — West Point Police Chief Donald Britt talked to West Point Rotarians Thursday about an upcoming event this Saturday on the city ball fields. It’s scheduled to be taking place from 3 to 6 p.m. EDT on the West Point Parks & Recreation football field, formerly known as the River Bowl. In the event of rain, it will be taking place inside the West Point Presbyterian Church, located on West 10th Street across from the Point University academic center.

Saturday is National Faith & Blue Weekend, a time for the public to meet with local police officers and faith leaders in a collaborative effort to build bridges and break down barriers through activities and outreach.

“This will be the first time we have done it, but we’d like for it to continue in future years,” Britt said. “We will be having a community prayer on the football field.”

A number of local ministers will be taking part, and goody bags will be given out to the children.

Britt is a strong believer in building relationships between officers and the people they serve.

“We have officers going to the schools and building relationships with the kids,” he said. “We want the children to know that they are their friends and can help them. It’s not good for children to be afraid of police officers. We are there to help, not harm.”

Children being afraid of officers can have bad consequences. Britt cites the case of a child getting lost in the woods. Uniformed personnel such as law enforcement officers will be looking for them to bring them to safety. The child doesn’t need to be scared of them and hide rather than let them know where they are.

Britt draws a comparison between people in law enforcement and in the medical field. In very rare circumstances, a doctor can prescribe medicine that worsens a patient’s condition rather than improving it. One mistake by a doctor doesn’t mean that all doctors are bad. Britt said it’s the same with police officers. The entire profession shouldn’t be judged by what a handful of officers do.

“We should judge people on an individual basis,” Britt said. “99 percent of the time, police officers are good, family people. It’s the same with everyone in any profession.”

Britt said that small-town departments like West Point are up against it when it comes to keeping well- trained officers. Like Lanett and Valley, West Point has the problem of investing in a young officer’s training only to lose him or her to a department with higher pay.

“We just want them to leave on good terms,” he said. “That way, they will know the door is open for them should they ever decide to come back.”

Before the coronavirus outbreak, WPPD had a program at West Point Elementary called Protect and Serve. The officers served breakfast and lunch to the students, and the kids loved it.

“At an early age, the kids felt good about their interactions with police officers,” Britt said. “It’s important for them to have feel-good stories about being around officers. I hope we can do this again when we get past COVID.”

With the Thanksgiving and Christmas holidays on the way, Britt offered some safety tips people should keep in mind.

“Try not to drive home at night by yourself. It’s better to have someone with you,” he said. “It’s better to be out in the daytime rather than being out at night. Make eye contact with the people you pass on your way to the car. If they think you got a good look at them, they are less likely to attack you. Remember to have your keys in your hand when you leave a building and go to your car. It will be easier for you to unlock it and get inside that way. Always park in well-lighted areas.”

Club member Carolyn Lott said that West Point, Lanett and Valley are blessed to be close-knit communities where police officers and citizens know and respect each other. This lessens the likelihood, she said, for the kind of violence that took place in some U.S. cities this summer. Another member of the club, attorney Brian Aplin, said that de-escalation of conflict is key to avoiding unnecessary tragedies involving police officers.

“Talk to your family members and friends about respecting the police,” Chief Britt said. “Let’s keep it positive. We want to get out of our vehicles and build relationships with people one person at a time.”

A big problem with some people is that they don’t like authority.

Britt said there’s a procedure to follow if someone feels they were treated unfairly in getting a citation.

“Get the officer’s name and have the time and date of the incident,” he said. ‘Talk to their supervisor and explain your side of the story. You can file a report, but if you do you can be charged with making a false report if the videotape of the incident backs up the officer and not you.”

Club member Gus Darden thanked Britt for the professionalism he is carrying on in the West Point Police Department.

“It’s a long-time tradition for the department to be this way,” he said. “West Point officers have been on good terms with kids for many years now. They have been good about going into schools and building relationships. I’m glad the department is still doing this.”

City of Valley to host fall festival in 2020

VALLEY — Valley Parks and Recreation will be playing host to a fall festival this year, but it will be... read more