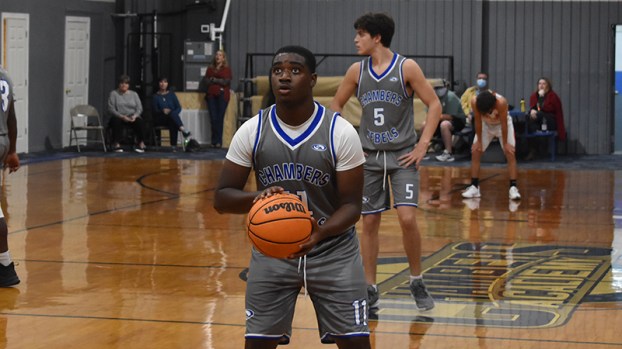 After losing a tight game against Springwood in late December, the Chambers Academy boys basketball team was once again in a tightly contested game on Tuesday, this time against area opponent Macon East.

The Rebels forced a poor shot from a Knight shooter and won the game by one.

“It was a big win for our team,” head coach Jason Allen said. “I can definitely see Macon-East being a Final Four team. They’re long, they’re athletic and just a smart basketball team. They made it look ugly for us, and fortunately, we were able to make it look ugly for them.”

In the first half, Macon-East stormed out of the gate, hitting seven 3-point shots. At the half, Chambers trailed by 12 points, but it made the necessary adjustments, mainly around the perimeter, to win the game 40-39. The win gave the Rebels their first area win of the year.

Last season, the Rebels won their area on a tie-breaker, something Allen could see happening again in 2021.

“You just never know. They’re a very good team,” Allen said. “If we beat them [on Tuesday], we have a great chance to be region champion… At the same time, I think the cream is going to rise to the top toward the end. I fully expect to play Macon-East again in the playoffs, hopefully not soon.”

Because of COVID-19, the AISA decided that every region game had to be played by Jan. 19 in case there was an outbreak that forced a team to miss some time. With games scheduled so early, teams would have time to reschedule region games before the playoffs in early February.

This is different than in years past. For example, Chambers played Heritage Christian in its final regular-season game last season, which ended up deciding the region champion.

“It is what it is. You’d like to have your games spread out a little bit more so you can have more game planning in between and more coaching, but it’s the same for both teams,” Allen said. “I like where our team is at right now. I think we have a good basketball team. We have a lot of options. Our guys are understanding what we’re doing. Right now, it’s just understanding the little things.”

Chambers will host Lakeside for its final home-region game on Friday. The Warriors are just 1-5 this season, but regardless of records, Friday is a big game for Allen and his team.

“Every region game is huge,” Allen said. “I tell the guys every December, we’re practicing until we get to the region games because that’s when it really counts. You just have to be ready and have a great plan. You have to play really hard and take care of those games.”