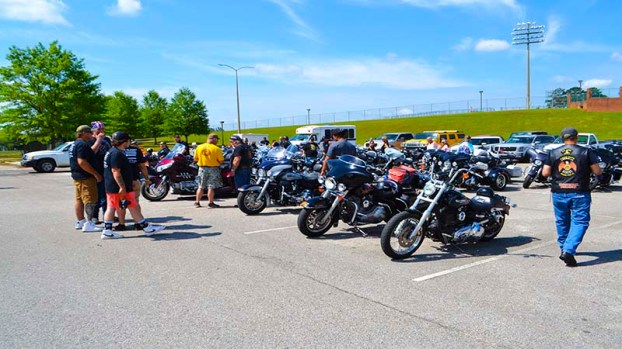 Saturday’s weather was ideal for motorcycle riding, and there was a big turnout for the Captain Jason Fuller Memorial Motorcycle Ride. An estimated 150 people took participated, and more than $8,000 was raised for the Alabama Sheriff’s Girls Ranch in Tallapoosa County.

VALLEY —Saturday’s Captain Jason Fuller Memorial Motorcycle Ride was a huge success. An estimated 150 participants took part, and a total of $8,665.25 was raised for the Alabama Sheriff’s Girls Ranch in Tallapoosa County.

A total of 100 motorcycles registered for the event, and another 50 or so people took part in cars or trucks.

Each participant had five stops along the way. They divided into groups with each group heading out to a different destination. One group went first to the Circle W near Lake Harding, another to Coach’s in downtown West Point, another to the 104 Pub in LaGrange and another to the Whitetail Pub in the Abbottsford community.

The stops were scheduled in such a way as to have limited gatherings at each destination. The ride ended in the evening with a gathering at the American Legion in Opelika. A live band, Wicked Dixie, played and there was an auction, a 50/50 drawing and door prizes.

The ride started at approximately 11:30 a.m. EDT at Valley Community Center. Blain Turner, the chaplain for the Chambers County Sheriff’s Office, had an opening prayer seeking safety and well-being for everyone taking part.

Fuller’s mother, retired educator Joann Fuller, was present for the start of the ride. “Jason would have been overwhelmed by the turnout and the fact it was such a good fundraiser for the Girls Ranch, a long-time favorite cause for the sheriff’s office,” she said.

She shared some photos of Jason riding a motorcycle.

“He loved riding it,” she said. “In most years, he would go to Bike Week in Panama City.”

Also known as the Thunder Beach Rally, the Panama City event is huge, drawing tens of thousands of motorcycle enthusiasts.

Organizers of Saturday’s ride were pleased with the way everything went and are looking to have another ride next year.

Fuller died of natural causes in late March. He was 47 years old.

Leaflets were passed out Saturday for the 9th annual Billy Lake Memorial Ride in Randolph County. It will be taking place on June 26 this year and is in memory of a popular law enforcement officer and coach who died in a motorcycle accident. For information, contact (334) 497-0351 or (334) 524-8927.

A single-vehicle crash that occurred on County Rd 32 at approximately 12:55 p.m. Saturday, June 5, claimed the life of... read more