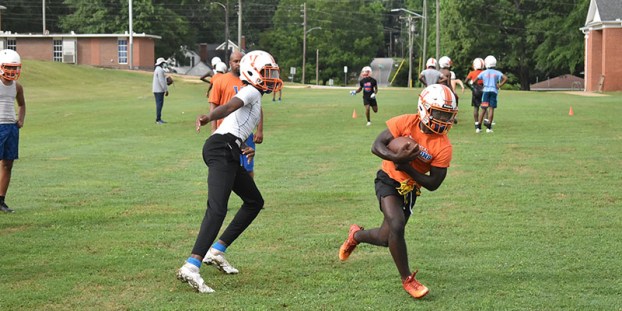 Valley football focuses on getting stronger in offseason

Since ending its season in October, the Valley football team has been focused on getting stronger, so it can match up against its 6A opponents in the fall. The process started less than two weeks after the Rams’ final game against Robert E. Lee, as the football team was back in the fieldhouse putting in time in the weight room.

Valley started its summer weight program this week, spending the first two hours in the weight room of the three-hour session.

“We want to use all the days we can get. We have to get stronger and in shape,” head coach Adam Hunter said. “Right now, we have 24 scheduled workouts, so hopefully we can get all 24 of those in. It’s going to be crucial to do that. When we’re playing 6A ball, we’re a little smaller than everyone, so we have to be tougher and stronger than what we’ve been in the past. That’s what we’re really going to focus on this summer.”

In the final hour of the sessions, the Valley coaching staff has been teaching the players the offensive and defensive plays. On Thursday, the team went onto its practice field, running through the concepts they had been learning.

The Rams, who were in helmets only, also lined up in seven-on-seven and 11-on-11 drills for the first time this summer.

“It’s good. We have to get these kids out here and do a little bit of football stuff,” Hunter said. “[We’re going to] teach our offense and teach our defense to them and polish up some stuff that we did in the spring and build on it. The weather allowed us to get out here today. It’s kind of the first day that we’ve done football stuff other than lifting weights. The kids are getting adjusted to it and the fast pace. We have a lot of young kids that are learning on the fly. To get on the field and do some drill stuff is big for us.”

Valley graduated several key seniors from the 2020 team, including most of its starting defense and skill players on offense. Most of the players that are competing for playing time this summer are young but earned experience late season during the final two games Valley played.

Hunter named three younger players that have stepped up during the spring and summer so far.

Sophomore Cam Dooley is battling for the starting quarterback spot and starting safety. Thursday was one of his best days throwing the ball, making several pinpoint accurate passes downfield. Juniors Quen Story and Izaya Robinson have taken over the middle linebacker spots and are leading the way on defense.

“The younger guys have stepped up,” Hunter said. “Cam Dooley is one of the guys that is going to lead the team, possibly, as quarterback. He’s been a leader. Quen Story has moved positions and is playing inside linebacker, so he’s stepped up. Izaya Robinson, he’s seen the field more than most of our secondary guys and linebacker guys. He’s got to fill in that role that Tino [Linson] and Dalton [Dunn] left us. He’s got to lead that defense. Those guys have stepped up, especially with Quen moving positions. He’s done a good job adjusting to that inside linebacker role.”

After staying in-state for one year, LaFayette graduate Corey Boston is heading west. Boston, who graduated from LaFayette in 2020,... read more