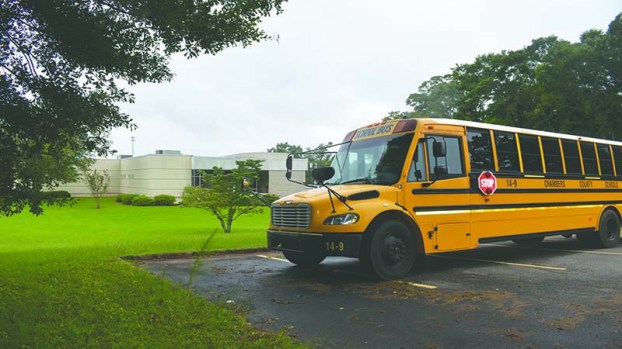 The Chambers County School District has been virtual this week due to rising COVID-19 cases in the school system.

But not all parents and families have reliable internet service.

To combat this, CCSD has parked buses with WiFi at locations across the county.

While students can use the WiFi in the parking lots the buses are parked in, Superintendent Casey Chambley said the WiFi spots are intended to reach people’s homes.

“You can actually access that several hundred yards out,” he said.

Students can’t actually get on the buses.

“Doing [virtual schooling] a week at a time or just doing it for one week is so much different than what we did before because we did it for longer periods of time, and we were using other platforms,” he said. “For long periods of time, a virtual platform is easier … However, doing it in short amounts of time, our teachers are responsible for the live instruction and doing things, and it’s just difficult to get that going and get that model set up in a day or two. When we went to that model on Friday, it was much more difficult for our teachers to get everything in place.”

Chambley said that the transition of Alabama schools to using a student information system called PowerSchool had caused some issues.

“The state had to take all of our information that we had, and they had to walk that information over and dump all of the data into PowerSchool,” he said.

As data takes time to be imported into Powerschool, Chambley said the school system is running into problems with student data, parental information, phone numbers, and other data.

“Some parents are getting informed of things,” he said. “Some are not. Some we don’t have emails for. It’s just causing a lot of issues and a lot of problems on that front. So, we’re all really working through it the best we can.”

Chambley urged any parents having problems to email their students’ teachers, principals, or administrators.

“And if you still can’t get anybody, contact somebody, one of the directors at the central office,” he said. “Dr. Sheila Jones is the elementary director. Dr. Sharon Weldon is the secondary director, and Mr. David Owen is the assistant superintendent. And so, we’re all here for you and trying to help solve those problems for everybody.”

While Chambley didn’t know the school district’s exact COVID-19 numbers, he said they’re declining significantly. He said updates on the numbers would be provided on the school system’s website, https://www.chambersk12.org, probably on Thursday.

The Chattahoochee Humane Society shelter in Valley is full, according to shelter director Shon Sims. Though it was able to... read more