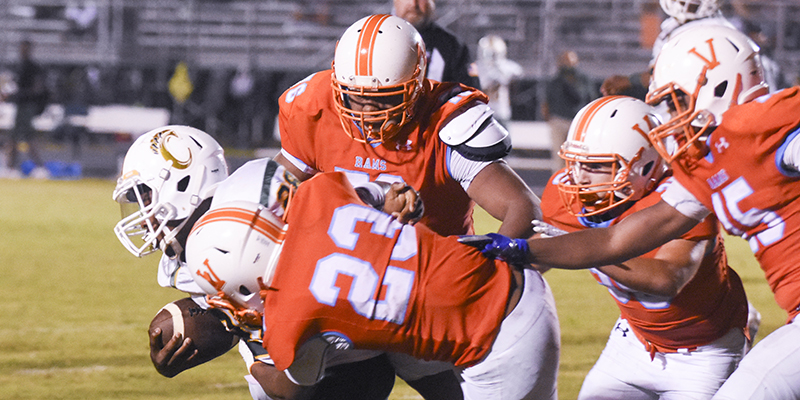 After sitting out week four due to their opponent canceling the game because of an outbreak of COVID-19, the Valley Rams are back.

Head coach Adam Hunter used the unplanned bye week to get his players healthy as the Rams get more into their 6A regional schedule.

“We got everybody back. We had some players out for a couple of days, but we got all the bruises and banged up people healthy,” Hunter said.

One of the key players injured in the Carver game that benefited from the week off was junior returner Kalen Sharell, who injured his shoulder against the Wolverines. Hunter said the junior was healthy and will play on Friday.

Hunter also used the week off to work on several areas where the Rams had not been as effective as Hunter hoped, especially special teams.

“We took that week to really focus on special teams, and we got better in those aspects of the game,” Hunter said. “That’s what it’s going to take to win this weekend. We got to put all three phases together and put a complete ball game together.”

The Rams play Sidney Lanier for the first time in 60 years, as the Poets travel to Ram Stadium.

Sidney Lanier is 1-2 this season, with its two losses against two region opponents.

In their two region games, the Poets have been outscored 63-6. However, the two region opponents they have faced this year are Opelika and Lee-Montgomery, which are No. 7 and 8 respectively in the latest Alabama Sports Writers Association rankings for 6A.

Even though the Poets have been outscored by 52 points this season, they have playmakers that the Rams will have to take into account on Friday.

“They’re going to be big up front and athletic on the edges,” Hunter said.

Defensively, the Poets are going to put pressure on the Rams to make plays on the edges and in the passing game as they like to stack the box against inside runs, which are a big component of the Rams’ offensive gameplan.

That grind it out mentality is key for the Rams starting offensive line, which is made up of a completely different group than the 2019 Rams’ line.

“The main thing is they’re young, and they’re young even for our experienced guys,” Hunter said. “They’ve made mistakes, but they’ve made up for it with effort. They’ve bowed their backs when we’ve needed them to and given us a chance. They’re growing every game.”

Defensively, Hunter wants to see improvements in the Rams’ tackling, which cost them in their week three loss to Carver.

“They’re going to try and get the ball in space and throw it a little bit, depending on the weather. We just have to get to the ball defensively and fly around and hit them,” Hunter said. “That’s going to be our main key defensively. We had a lot of missed tackles against Carver that cost us a little bit. We have to shore those up.”

The game is also the Rams’ homecoming. Even homecoming is special for many reasons, Hunter is making sure his team is ready for the actual 48-minute contest.

“Homecoming is for all the fans to come back to see. It really doesn’t have much to do with our football team,” Hunter said. “We treat it just like a normal game. Of course, the kids want to win, especially for homecoming, but we treat it as a normal game.”